NASA’s latest Mars rover landed on the red planet last Thursday. The downside to “watching live” is you can’t get a good view of the action, thanks to the distance between our worlds. Today, NASA released a new video showing the daring landing up close, and you should watch. Then drive Perseverance around your home and visit Mars with a new free AR app.

Landing a Mars Rover is extremely hard. It is so hard that only 40% of the rovers sent to Mars have landed successfully, regardless of which Agency sent it. The entire sequence happens in around seven minutes, and sending a radio signal from Mars to Earth takes about 11 minutes. By the time NASA knows the rover entered the atmosphere, the rover has already finished landing. So all of the steps need to be automated.

In the case of Perseverance, that means decelerating through the planet’s orbit, deploying a parachute, shedding a heat shield, getting a radar lock on a suitable landing spot, and navigating to that location. Then the rover needs to shed its outer shell, fire jets from a sky crane, lower away from the crane, and touch down softly enough to survive.

If anything goes wrong, there’s nothing NASA can do. By the time the space agency knows, it’s too late to save the rover, which is what made Perseverance’s successful landing so monumental. But while the live stream gave us information and reaction in real-time, we couldn’t watch what was going on. Now NASA released video that shows the landing in never-be-seen angles. The rover has cameras, and so does the sky crane and other pieces.

Watch the video, and you can see Perseverance fall to Mars, you can watch the parachute deploy, and you can spectate as the final moments towards touchdown happen. It’s a long video with lots of information, but it’s worth watching. We even skipped to the landing for you.

Once you finish watching the video, you might want to know about the Perseverance rover. It’s a much larger, more advanced Mars rover than we’ve previously sent. Thanks to onboard cameras and microphones, it’s already sending back images and audio of our planetary neighbor.

But if you want something more of a first-hand view, check out the Augmented reality app Mission to Mars (for iOS and Android). The AR app has quite a few features with hours of educational content. You can compare the new Perseverance rover app to the previous machines to see size and equipment distance.

But the real fun is in the augmented reality capabilities. You can put Mars in your living room, then drive around the rover. It’ll scale down to fit the area available, but if you have the room, you can make AR Perseverance full-sized.

The education app even has a few game features, and they’re worth checking out. In one mode, you’ll try to land Perseverance on Mars, which entails deploying a parachute, firing thrusters, and more. If you crash, the game will tell you and why.

But by far, the visually appealing mode is Portal to Mars. That mode gives you a “holodeck”-like experience, allowing you to step through a doorway onto Mars. Look back, and you’ll see your home, but turn around, and you can walk up to the Perseverance rover and get a feel for the Mars rocky terrain.

Right now, the app primarily relies on data about the rovers provided by NASA and images and audio taken by previous rovers. But the Smithsonian Channel says it will update the app with new photos and audio taken by Perseverance. Best of all, the app is free and ad-free. You can download it now on Google Play and the Apple app store.


Security researchers at Red Canary have discovered a mysterious new malware on nearly 30,000 Macs, though the actual number of infected computers is probably much higher. It appears that the malware, nicknamed Silver Sparrow, is waiting for the right moment to deliver a malicious payload to its host devices. It’s one of the first viruses to run natively on both Intel and M1 Macs.

Silver Sparrow hasn’t harmed any computers yet, but it checks a control server for new commands every hour. Without access to this control server, we have no way of knowing the goal behind Silver Sparrow. That said, the fact that someone is waiting to “activate” the malware is alarming.

Another alarming factor is Silver Sparrow’s unique, ingenious design. It’s distributed in two unique packages, titled updater.pkg and update.pkg. While macOS malware usually relies on preinstall or postinstall scripts to execute commands, these packages execute commands through the less-transparent JavaScript API. Of all the malware that Red Canary has encountered, it says that Silver Sparrow is the only one to leverage the JavaScript API.

Upon installation, Silver Sparrow looks up the URL that it was downloaded from, probably to help its designers track which infection methods are the most effective. Interestingly, Silver Sparrow relies on AWS S3 and Akamai CDN cloud services for file distribution, which suggests that its designers are experienced with web servers and cloud computing. Cloud distribution is more resilient than single-server distribution methods, and using popular cloud infrastructure like AWS allows the malware designers to “blend in” with regular web traffic.


Messages for important announcements can often get lost in a crowded WhatsApp group, especially when everyone is typing at the same time. But if you’re an admin, here’s how you can pause public chatter by restricting the ability to send messages to yourself.

Launch the WhatsApp app on your Android smartphone, tablet, or iPhone, and from under the “Chats” tab, enter your group chat.

Tap the group’s name at the top of the conversation to view its profile page.

Scroll down and select “Group Settings.”

Switch it to the “Only Admins” option. Select the “OK” button to save the new setting.

Now, only the admins have the right to send a message in your WhatsApp group chat. The rest of the members’ access will be downgraded to read-only.

Once you update this preference, WhatsApp will add an alert message in the group conversation to inform the participants of the change. For members, the usual compose text field at the bottom will also be replaced with a fixed note that says “Only admins can send messages.” The group’s past history of messages, however, won’t be affected.

To go back to the group chat’s previous state, you will have to return to the “Group Settings” menu and switch back to “All Participants.” 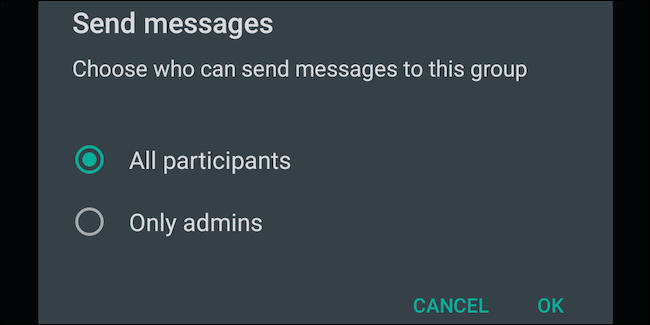 Since admins are in control of this group setting, you can even flip back and forth between the two choices. When you have information to share that you need to make sure everyone reads, you can disable public messages and enable them again later.

On the other hand, if you’re just fed up with your phone constantly buzzing due to a chatty group, you can consider silencing WhatsApp group notifications or muting a chat indefinitely.

Hi! My name’s Carrie and this is my site – Dark Horse Gaming.

I love everything to do with video games, and pretty much anything geeky. My friends would call me a gamer and a bookworm.